The O3Zone Generator: Creating Ozone out of Thin Air 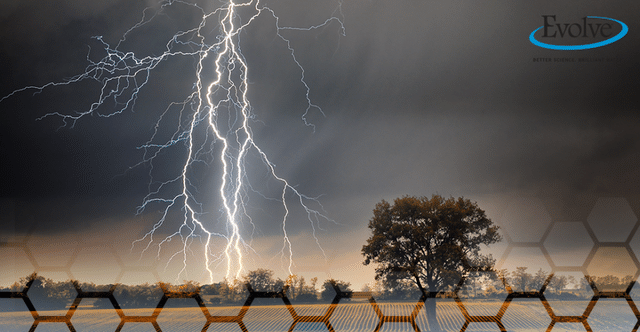 To say that we take electricity for granted is an understatement. It’s the foundation of every modern convenience, hidden and invisible inside humming wires, tucked into the circuitry of the computers and phones we use daily, and living inside the wiring behind our walls. We only really notice it when it stops working, when the lights flicker or a breaker flips.

For something that everyone uses every single day, most people don’t really understand some of the capabilities that electricity has outside of powering our lives. For example, did you know that electricity is the catalyst behind keeping Evolve water filters clean and free from slime-producing bacteria?

The Evolve O3Zone generator combines the power of electricity with oxygen to create ozone, a powerful oxidizing gas that keeps the filter media tank clean from nuisance bacteria.

Ozone (O3) is an inorganic gas that is formed by the dioxygen (O2) we breathe every day reacting with ultraviolet light and electrical discharges within the earth’s atmosphere to create the oxygen molecule. In large concentrations, it is a pale blue gas with a sharp odor reminiscent of chlorine. You’ve likely heard of the ozone layer before. This layer of ozone appears just above the stratosphere, extending from six to thirty miles above the earth, and helps to filter out harmful UV rays from the sun.

A more harmful version of ozone can be found in the troposphere, the atmospheric layer closest to the ground. This “bad” ozone is created through UV light reacting with industrial pollution, car exhaust, and other harmful vapors. “Bad” ozone levels typically spike in hot summer months over big city centers.

Evolve’s line of iron and sulfur air-injected filters are designed to reduce impurities like dissolved iron and sulfur gasses. But, the process behind filtering out these impurities is tricky since they’re dissolved in the water. In the very top of the media tank of an Evolve air filter is a pocket or dome of air. As the water containing dissolved iron and sulfur gas passes through this pocket of air, they become oxidized and precipitate to become tangible particles, allowing them to be filtered out through the media in the tank below. These precipitated solids are then caught by the media allowing clean, impurity-free water to enter your home. Once the media in the tank becomes too full of these precipitated particles of iron or sulfur, the air filter enters “regeneration,” a multi-stage process that rinses, shakes, and cleans the media of the captured particles and sends them down the drain. Once cleaned, the media is ready to start working again, oxidizing and capturing impurities.

Through all the precipitation, filtering, and regeneration, nuisance bacteria can begin to build up in the interior of the air filter over time. These bacteria thrive in the humid conditions inside of the tank feeding on the iron in the water, leaving behind a slimy residue that will begin to ruin the effectiveness of the filtration process and will leave your water tasting foul and smelling terrible. 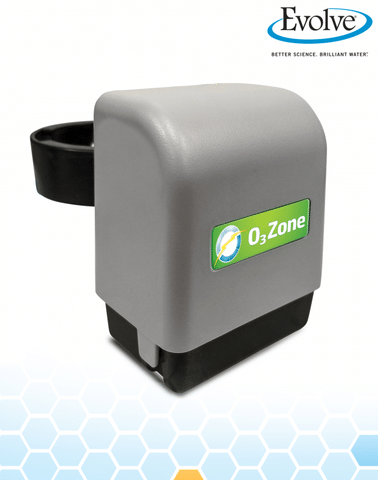 After installing an O3Zone generator onto an Evolve Air Filter, when the unit pulls air into the media tank to refill the top air dome during regeneration, it will first pass through the generator before entering the tank. Inside, the O3Zone generator is equipped with a cell that generates a small electrical field. When the oxygen being pulled in passes through this cell, it zaps it with a bolt of electricity turning it into ozone, much like a bolt of lightning during a storm. This newly formed gas has natural sterilization properties. Adding it to the regeneration cycle of your filtration system will prevent bacteria from growing which will, in turn, reduce any unwanted slime buildup or funky odors inside. Since the O3Zone generator uses nothing but electricity and oxygen, it is a chemical-free environmentally friendly solution to maintaining your air filtration unit.

The Evolve O3Zone generator is an available option on all Evolve iron and sulfur air-injected filters. To determine if ozone generation is something that is necessary or beneficial for the water conditions in your home, the first step is talking to your local authorized Evolve dealer. Regardless if you already have a filtration unit installed or if you’re ready to finally take care of that iron or sulfur problem once and for all, your Evolve professional will test your home’s water and see which treatment solution is best for you. Give us a call with your questions today!